Keating Has This Correct

By: Porl
In: Military, politics
Tagged: australia, economy, United States
Hot Posts
Oh Dear God, Its ComingQatar DebacleThey Are Bloody KiddingTotally DelusionalThe Shit We Put Up WithThese Bastards Do Not Deserve To LiveOh Dear They Are All In The ShitPeople Are Pissed OffThe True Cost Of This Covid BullshitSLR To ReturnGladys (Gonzo) Is In The Shit Big TimeKyle MitchellYou Still Believe The Government? Fool YouAn Inescapeable ConclusionCivil War ImminentKeating Has This CorrectWas Just A Matter Of TimeSociety In Self Destruct ModeWe Have Won The ShitfightAlternative Communication

This website has to fully agree with Paul Keating – we dont stand a chance against China.. We lost to a bunch of illiterate goat herders driving questionable vehicles while they lived in cave in Afghanistan. We on the other hand had all the most modern of equipment and technology.

Former PM Paul Keating slams AUKUS partnership, questions what chance the US would ‘have in a full blown war against China’

Former Prime Minister Paul Keating has issued a fiery statement in response to the AUKUS partnership, questioning what chance the US would have in “a full blown war against China” if it ” could not beat a bunch of Taliban rebels with AK47 rifles in pickup trucks”.

Former Prime Minister Paul Keating has slammed Australia’s trilateral security partnership with the United Kingdom and the United States, claiming it will lead to a “further dramatic loss” of the nation’s sovereignty.

The first initiative of AUKUS will be collaboration on future nuclear-powered submarines for the Royal Australian Navy.

“The announced agreement … will amount to a lock-in of Australian military equipment and thereby forces, with those of the US with only one objective: the ability to act collectively in any military engagement by the US against China,” Mr Keating said. “This arrangement would witness a further dramatic loss of Australian sovereignty, as material dependency on the US robbed Australia of any freedom or choice in any engagement Australia may deem appropriate.

“Australia has had great difficulty in – running a bunch of Australian-built conventional submarines – imagine the difficulty of moving to sophisticated nuclear submarines, their maintenance and operational complexity.”

Mr Morrison was forced to respond to Mr Keating’s assertions during a second press conference on Thursday after a journalist asked the Prime Minister for his response to “concern” about Australia’s long-term dependence on America. 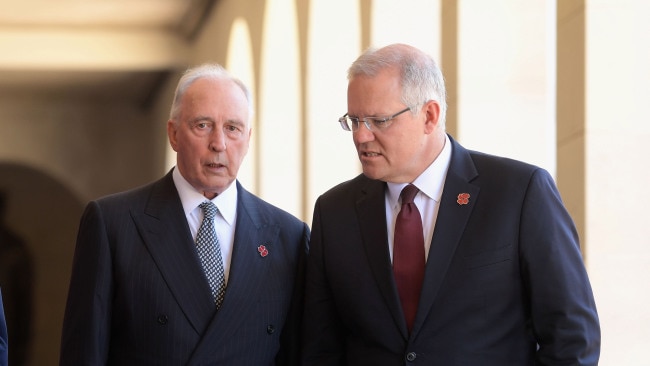 “I prefer to be in the company of John Curtin and Robert Menzies when it come to this issue, and John Howard.

“And indeed many Prime Ministers over the course of a long history in addition to Robert Menzies, there have been 14 Australian prime ministers who have stewarded the ANZUS alliance together with 14 American presidents.

“This has come from both sides of politics on both sides of the Pacific and this has always been a project that has gone well beyond any partisan issues I think in either country, and that is welcomed.”

Mr Morrison reiterated everyone is entitled to their own views on these issues, including Mr Keating.

“The former Labor Prime Minister is entitled to his views and be respected for those views but those are not views my government shares,” he said.

“My government shares the view that is grounded in the decision of Curtin and Menzies which has always understood that our relationship with the United States is a forever relationship.

“It is a relationship that has served our peace and security interests for a very, very long time and will forever into the future.”

Mr Keating’s statement continued with questioning the US’ reliability around strategic commitments as its military engagements “are under question”.

The former Prime Minister, who led from 1991 to 1996, also referred to US troops leaving Afghanistan.

“If the United States military with all its might could not beat a bunch of Taliban rebels with AK47 rifles in pickup trucks, what chance would it have in a full blown war against China, not only the biggest state in the world but the commander and occupant of the largest land mass in Asia?” he asked.

“When it comes to conflict, particularly among great powers, land beats water every time.”

He said China is a continental power, while the US is a naval power.

“And that the United States supply chain to East Asia would broadly need to span the whole Pacific from its base in San Diego and other places along the American west coast,” he said.

“Australia, by the announced commitments, would find itself hostage to any such gambit.”

The leaders of Australia, the UK and the US said the partnership is guided by their enduring ideals and shared commitment to the international rules-based order.

“We resolve to deepen diplomatic, security, and defence cooperation in the Indo-Pacific region, including by working with partners, to meet the challenges of the twenty-first century,” a joint statement read.

The submarines will be built in Adelaide, in close cooperation with the UK and the US.

Who Do You Trust The Most
Total Votes: 10
Only registered users can vote. Login to vote.